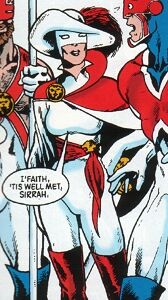 Captain Albion first encountered Captain Britain after he had been abducted by the Special Executive on behalf of Saturnyne. Captain Albion and Captain England had been selected as the guards for Saturnyne while she was awaiting trial for the mishap on Earth-238 involving Mad Jim Jaspers.

Retrieved from "https://britishcomics.fandom.com/wiki/Captain_Albion?oldid=118142"
Community content is available under CC-BY-SA unless otherwise noted.