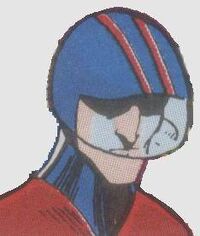 Captain Airstrip One is a member of the Captain Britain Corps responsible for Earth-744. He encountered Captain Britain (Brian Braddock) at Merlyn's funeral on Otherworld.

Captain Airstrip One's world is reminiscent of that of George Orwell's 1984, and the Captain himself was revealed in the small press title Mad Dog #10 to work for the Thought Police.

Retrieved from "https://britishcomics.fandom.com/wiki/Captain_Airstrip_One?oldid=108184"
Community content is available under CC-BY-SA unless otherwise noted.