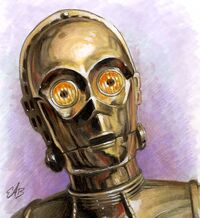 Threepio is a protocol droid originally built by Anakin Skywalker, whose long and interesting career has mostly involved being shot at while in the employ of Luke Skywalker and the Rebel Alliance. He really wishes people would stop shooting at him, as he basically just wants a quiet life. He is the partner of R2D2.

Fluent in over six million forms of communication.

Retrieved from "https://britishcomics.fandom.com/wiki/C3PO?oldid=155940"
Community content is available under CC-BY-SA unless otherwise noted.