Buster, originally drawn by Bill Titcombe, first appeared in Buster #1 on May 28th 1960. He is supposedly Buster Capp, son of newspaper strip character Andy Capp and his wife Flo, though the alleged connection was dropped in the comic after just a few months and not really referenced again until the Buster comic's final years. Buster, who was never seen without his trademark cap (although his original cap was replaced by a more modern-looking baseball cap in 1992) was the comic's cover star for most of its run, although his strip went through several name changes, from Buster, Son of Andy Capp to Buster's Diary to Buster's Dream World and then back to Buster's Diary and eventually just Buster. Artists who later worked on the strip included Reg Parlett, Hugh McNeill, Angel Nardal, Tom Paterson and Jimmy Hansen. In the last ever Buster strip in January 2000, the character finally takes off his cap for the first time in forty years, to reveal that he has the same haircut as Dennis the Menace. 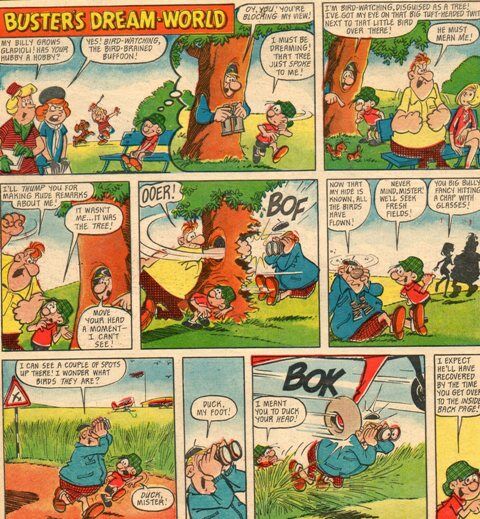 Retrieved from "https://britishcomics.fandom.com/wiki/Buster_Capp?oldid=92769"
Community content is available under CC-BY-SA unless otherwise noted.