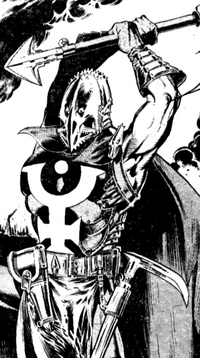 Brother Behell is a character in the 2000 AD strip Nemesis the Warlock. After the evil Torquemada's supposed death in a transporter accident, Brother Behell quickly rose in the ranks hoping to replace his former leader.

Behell conquered and slaughtered countless races. After nearly wiping out the entirety of a planet of tree people, Behell decided to crown himself the new Grand Master of Termight (formerly known as Earth).

Shortly before the crowning, Brother Odo, a psychic, came to Behell and attempted to warn him of Torquemada's wrath if he were to go ahead with the ceremony. Behell ignored him and sure enough, Torquemada's ghost rose from the ground and chucked Behell into the Alien Pit where he was torn to pieces by savage aliens.

Retrieved from "https://britishcomics.fandom.com/wiki/Brother_Behell?oldid=60685"
Community content is available under CC-BY-SA unless otherwise noted.