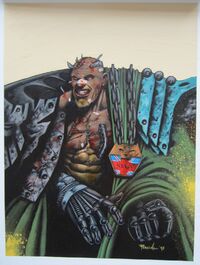 An operative of the Brit-Cit Justice Department's Search and Attack Squad (in fact, its only remaining operative), Judge Newt is a bit of a brute, and he lives in Brit-Cit. Hence, Brit-Cit Brute. It's fairly self explanatory, really.

Arthur Conan Newt is named after the Scottish author Arthur Conan Doyle, who invented the character of Sherlock Holmes.

Retrieved from "https://britishcomics.fandom.com/wiki/Brit-Cit_Brute?oldid=77200"
Community content is available under CC-BY-SA unless otherwise noted.