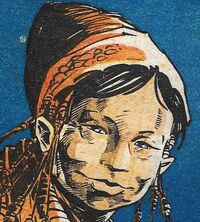 In Book I of The Ballad of Halo Jones, Brinna was the housemate of Halo, Rodice and Ludy, and owner of the cyber-canine Toby. She was older than her housemates and tended to mother them. Much about Brinna's life was a mystery: she was rich enough not to live in the Hoop, a housing estate for the unemployed, but did so anyway, and she appeared to be engaged in some sort of research that involved watching three-dimensional recorded dramas (the 50th-century equivalent of soaps and films). She was particularly fond of 46th-century philo-gothic sitdrams such as Wittgenstein Has Risen From His Grave. It was her idea to watch the starliner Clara Pandy fly overhead on her way to the scrapyard, because she had met the original Clara Pandy, an explorer, at the age of nineteen.

When Halo and Rodice came home from a routine shopping trip and found that Brinna had been brutally murdered (intriguingly, the investigating officer claimed to have known Brinna a long time ago and called her "a special woman"), it prompted Halo to escape the Hoop by getting a job on the Clara Pandy, which a wealthy businessman had saved from being scrapped. Halo later discovered that the robot dog Toby had killed Brinna. In the event of Brinna's death Toby was to be inherited by Halo, so Toby murdered her because he was in love with Halo and wanted nothing to come between them.

Halo was still thinking of Brinna over ten years after her death.

Human female who doesn't get much exercise.

Retrieved from "https://britishcomics.fandom.com/wiki/Brinna?oldid=87147"
Community content is available under CC-BY-SA unless otherwise noted.