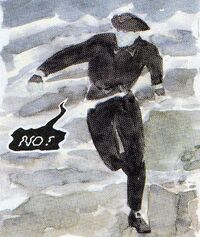 Brigand Doom is the eponymous protagonist of a strip in 2000 AD. He was a mysterious, seemingly undead crimefighter who patrolled the futuristic fascist dystopia known only as The City, dispensing justice while inexplicably dressed as Dick Turpin. Who he was and why he did this, we never found out, and Doom himself didn't seem to know, either. At one point, he encountered another, apparently similarly supernatural entity which referred to itself as the Magus and claimed to be both "the dark underbelly of the City" and "your (Doom's) father", but what precisely it meant by this was never really explained.

When last seen, Brigand Doom promised to return "Only when evil once more rears its head in The City." Investigator Nine's response was, "As soon as that?" We're still waiting for Doom to reappear, which leads one to the happy conclusion that the situation in The City has drastically improved since Doom's final story.

Able to appear and disappear at will; good with computers.

Flintlocks with a variety of supernatural attributes.

Retrieved from "https://britishcomics.fandom.com/wiki/Brigand_Doom?oldid=51468"
Community content is available under CC-BY-SA unless otherwise noted.