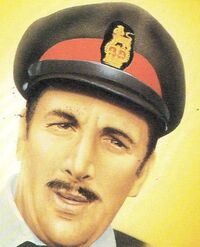 Brigadier Sir Alistair Gordon Lethbridge-Stewart was the original commanding officer of U.N.I.T. (the United Nations Intelligence Taskforce) and a longtime friend (and sometime employer) of the Time Lord known as the Doctor, though in the early days of their association they frequently clashed over matters of ideology. The Brigadier first encountered the Doctor in his second incarnation, but was chiefly associated with him in his third. They drifted apart when the Fourth Doctor ceased working for U.N.I.T., in either the mid 1970s or the early 1980s (don't ask).

The Brigadier and the Doctor later reconnected and apparently kept occasionally in touch for several decades until the Brigadier's eventual death from natural causes, by which time he was mostly retired and on his second marriage. The Brigadier's daughter, Kate Lethbridge-Stewart, now holds a senior position in U.N.I.T. and continues the family's association with the Doctor.

The Brigadier's first appearance in comics form came in the TV Comic story The Arkwood Experiments (TV Comic #944 to #949) but he has since made numerous appearances in titles including Doctor Who Magazine and the Doctor Who Annual.

Retrieved from "https://britishcomics.fandom.com/wiki/Brigadier_Lethbridge-Stewart?oldid=152109"
Community content is available under CC-BY-SA unless otherwise noted.