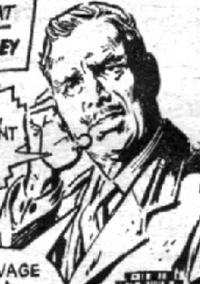 Brigadier Bently Pearson is a character from the 2000 AD strip Invasion!. He was a resistance fighter who led a small group named the Mad Dogs against the invading Volgan forces. Pearson's military background made him a stickler for plans and following orders and caused him to punish men who failed to keep up or follow command. Despite his masterminding a few clever raids against the Volgs, his attitude eventually caused many of his men to leave, including Bill Savage and Peter Silk.

Retrieved from "https://britishcomics.fandom.com/wiki/Brigadier_Bently_Pearson?oldid=98577"
Community content is available under CC-BY-SA unless otherwise noted.