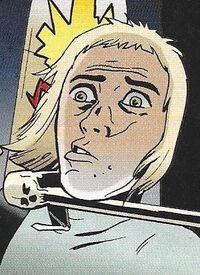 Brian 'Minger' MacCready is a character from the 2000 AD strip Second City Blues. He was the youngest son of Barry MacCready, head of the MacCready crime family in Second City. Unwilling to enter the family business, Minger instead took up the dangerous sport of Slamboarding as one of the Second City Blues, much to the alarm of his father, who continually worried about his safety despite routinely engaging in acts of extreme violence himself in the course of his business. Brian supplemented his income by dealing in the illegal narcotic known as Ink.

Brian suffered from Baumann's Syndrome, a severe neurological disorder kept at bay by medication. His teammates were unaware of this and the Centaurean Danny assumed he was taking performance-enhancing drugs. (Which is what medicine technically is, but anyway...)

His board; helmet; kneepads.

Retrieved from "https://britishcomics.fandom.com/wiki/Brian_%27Minger%27_MacCready?oldid=77481"
Community content is available under CC-BY-SA unless otherwise noted.