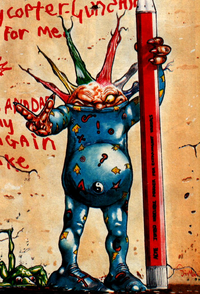 Bradley was a 2000 AD strip about a diabolically ill-behaved alien infant called Bradley, who first appeared in one of Tharg's Future Shocks before graduating to his own strip. Some of his stories were parodies of the 'Rupert Bear' format, where monotonous lines of square pictures are described in short paragraphs of text which are summarised in twee little rhyming couplets. Pictured is the wunderkind standing next to a graffito he has drawn. He also set a fiendish trap for elderly philanthropist Father Christmas.

It is not known whether Bradley's bad behaviour was caused by genes, poor parenting, Attention Deficit Hyperactivity Disorder or all three. Fortunately, he never teamed up with Thoth.

Bradley for some reason (popular demand?) had a one-panel cameo in 2000 AD prog 2000 (published September 2016), where he was drawn by Colin MacNeil.

Retrieved from "https://britishcomics.fandom.com/wiki/Bradley?oldid=80354"
Community content is available under CC-BY-SA unless otherwise noted.