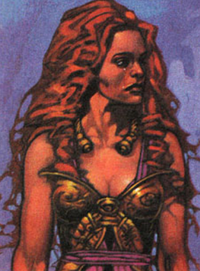 Queen Boudica is a character from the 2000 AD strip Sláine. She was a savage leader and one of the last major oppositions against the Roman invaders of Britain.

Sláine MacRoth, having been sent forwards in time by the goddess Danu, came to Boudica shortly after she and her daughters had been raped by the demon Elfric. The two married and formed a large-scale assault on the Romans, slaughtering an entire city of men, women and children. This attack, however, greatly angered the Roman Emperor Nero. He ordered an attack led by Elfric and his demons against Boudica's tribe, culminating in her daughters having their heads hacked off by Elfric.

Despite winning the battle, Boudica had failed herself and decided to put herself to death. She and Sláine entered a sealed tomb and poisoned themselves, with Boudica's reign of defiance finally coming to an end. Shortly afterwards Sláine awoke and travelled forward into the future a second time, ending up in the Middle Ages. Boudica's ultimate destination is not recorded.

Retrieved from "https://britishcomics.fandom.com/wiki/Boudica?oldid=72991"
Community content is available under CC-BY-SA unless otherwise noted.