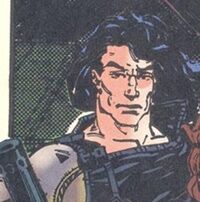 Boot was a former member of the mercenary group known as the Warheads who worked for the evil techno-wizards of the Mys-Tech Corporation. He was killed in a skirmish with the mutant revolutionary Cable (an ally of the X-Men) but resurrected by the alien wizard Vorin who transformed him into a member of his private army of reanimated bikers, the Shadow Riders, to help combat Mys-Tech. His wherabouts and activities since Mys-Tech were defeated are unknown.

Like the rest of the Shadow Riders, Boot needs little sleep since his return from the dead, so he watches an awful lot of TV. Particularly Star Trek and Red Dwarf.

Retrieved from "https://britishcomics.fandom.com/wiki/Boot_(Shadow_Riders)?oldid=77165"
Community content is available under CC-BY-SA unless otherwise noted.