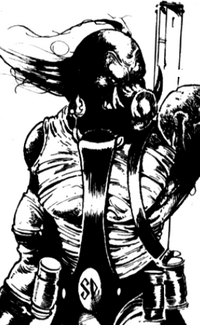 Boarhillser was a mutant Strontium Dog. He, Johnny Alpha, Middenface McNulty and Achondro were hired by the distinctly dodgy priest Sagan to help the cleric retrieve some mysterious lost relics.

Boarhillser helped his team through various obstacles on an alien planet, using his sheer brute strength to beat down his enemies. During an assault against Commander Kreeg, who had the artefacts, Boarhillser was hit with a boulder, causing him to bleed out. Knowing he was dying, he asked to confess his sins to Sagan. However, the treacherous priest stabbed him instead.

Retrieved from "https://britishcomics.fandom.com/wiki/Boarhillser?oldid=44046"
Community content is available under CC-BY-SA unless otherwise noted.