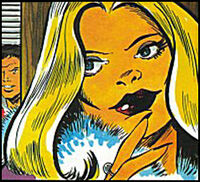 Working as a criminologist for the police department, Zora Loftus stole the technology belonging to the Vulture to create the identity of the Bluebird and began a series of robberies that caught the attention of the Spider-Man.

Later she went on a talk show hosted by Charlie Gladhand and taunted Spider-Man that he was probably working as a team with Bluebird and that he too was a criminal.

Her subsequent fate has yet to be recorded.

Bluebird uses technology stolen from the Vulture. Electromagnetic Wing Harness: Utilizing the stolen harness the Bluebird is able to fly with a natural winged flight limit. The anti-graviton generator attached to her suit enables her to take to the air by flapping the bird-like wings she wears under her arms. When wearing the electromagnetic harness, she possesses superhuman strength, vitality and athletic prowess.

Retrieved from "https://britishcomics.fandom.com/wiki/Bluebird?oldid=102013"
Community content is available under CC-BY-SA unless otherwise noted.