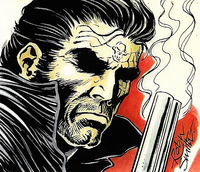 Blue is the protagonist of the 2000 AD strip Bad City Blue. He worked as a 'Button Man' or law enforcement official for Bader City, a futuristic conurbation under a protective dome on an asteroid. Blue, a former criminal who had been 'reprogrammed' by government scientists, was unshaven, scarred and heavily armed, with a furrowed brow and hair that looked like it hadn't been combed for a month — your typical 'tough guy' anti-hero (who also happened to collect watches). He had a fondness for Jack Daniels and gourmet cheese.

As the story opened, Blue discovered that all the 'Class A' citizens had left the dome, and that the news being broadcast was solely repeats. He also started getting bad headaches, a sign that his programming was beginning to fail. Blue went to the library and found out that the Class A citizens had left the Class Bs to "share Bad City's doom," and that he and the other Button Men were being directed only by robots.

Some Button Men turned up to eliminate Blue, but he escaped from them down the inter-dome tubes into 'Jung-Dome', which contained a tropical forest. Kindly strangers removed the 'button' from his head, causing him to revert to a primitive, animalistic state — that of the gang member he had been before the city brainwashed him.

An elderly scientist explained that on its present course the city was destined to be "sucked into the vortex of a black hole." The only way to save it was to travel through the slums to the city's engine chambers and fire all the boosters at once, allowing the city to break free. Blue, in his pidgin English, volunteered for the job. The scientist then explained that he was Supreme Engineer Bader, who had designed the city but had come to hate it and see death as a blessing. When Blue asked him why he wanted to save the city, he said, "I don't know."

Blue made it to the engine chambers and fired the boosters, but they didn't have enough power in them to change the city's course. Blue resolved to be "Big Chief-Boss... Top scummer" of the city in whatever time it had left.

Retrieved from "https://britishcomics.fandom.com/wiki/Blue?oldid=147259"
Community content is available under CC-BY-SA unless otherwise noted.