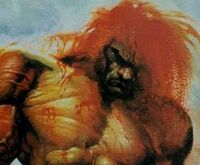 Bloodseed was one of a race of warriors genetically engineered by the alien Gene Corps. The aliens implanted false memories of a kingdom called Elysium in the warriors, as well as an uncontrollable urge to attack any of their own kind that they ran into, the idea apparently being that only the strongest would survive. Lysander Bloodseed was manipulated by the Gene Corps and put through a number of trials while searching for his non-existent kingdom before being transported to Earth for reasons which remain unclear.

Retrieved from "https://britishcomics.fandom.com/wiki/Bloodseed?oldid=109084"
Community content is available under CC-BY-SA unless otherwise noted.