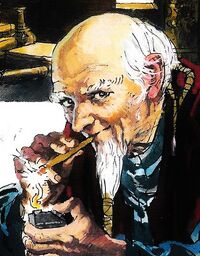 Blazen is a character in the 2000 AD strip The Order. One of a group of warriors dedicated to protecting medieval Europe from supernatural threats, the eccentric Blazen is the brains of the outfit. He also takes an interesting variety of drugs (including 'coca', which shouldn't even have been known in Europe in 1210 AD), and has a 'familiar' — a transparent bird called Ergo whom only he can see, and who also seems to be his brother. His best friend Schmidt used to keep an eye on him. (And when Schmidt didn't keep an eye on him, Blazen got his kicks by spiking people's drinks with hallucinogenic mushrooms.)

Blazen, Schmidt, Ritterstahl, Iron John and Anna Kohl saved the human race from an invasion of 'wurms' in the early thirteenth century. Unfortunately, Iron John and Schmidt perished in the attempt, but Blazen was apparently still alive some two hundred years later...

Perfect recall of every word and image he has ever seen; armed combat.

His perfect recall is so overwhelming that he needs Ergo to keep him sane.

Later in the Order's history, when it was based in New Atlantis, Intuitor Browne had a robot bird called E.R.G.O.

Retrieved from "https://britishcomics.fandom.com/wiki/Blazen?oldid=86637"
Community content is available under CC-BY-SA unless otherwise noted.