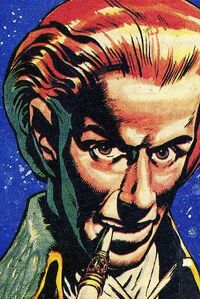 Doctor Blasco initially appeared to be working with Space Fleet, the inventor of the experimental fuel Monatomik Hydrogen, but turned out to be the leader of a secret order known as The Web, who were in league with the evil alien Vora and the High Lords of Saturnia. Blasco had allied himself with Vora intending to set himself up as Emperor of Earth after the so-called "Black Cat Invasion", but was defeated by Dan Dare and his allies.

Retrieved from "https://britishcomics.fandom.com/wiki/Blasco?oldid=20781"
Community content is available under CC-BY-SA unless otherwise noted.