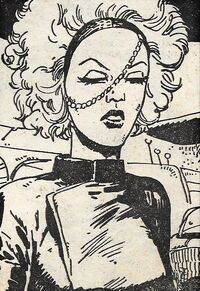 Blanche Tatum is a character from the 2000 AD strip Judge Dredd. Born Blanche Kominsky, she was a cadet Judge who was expelled from the Academy of Law in her twelfth year, in 2093 AD, for an unauthorised liaison with a male citizen, Nicholas Tatum, whom she later married. Blanche and Nicholas had two children together, but Nicholas then killed himself after becoming heavily indebted to several criminals. Calling herself 'The Executioner', Blanche used her judicial training to become a vigilante and kill those whom she deemed responsible for her husband's death (including crime kingpin Hebismond Swarf; racketeer Jack Beauty; body sharks Maurice and Rafael Chivo; Jo-Jo; and Dutch Sagan). With each body she left a note reading "JUSTICE IS DONE."

Before her final mission, Blanche told her two children to go to their grandmother, who would look after them. After killing the last man on her list, she was confronted by Judge Dredd and Judge Axel. Because she refused to drop her gun, Dredd shot her dead. It turned out that her gun wasn't loaded. Axel theorised that "she wanted to die," and Dredd replied, "She got her wish." In the end, Blanche retained too much of her Academy of Law training to allow herself to kill and not be punished for it. Her last act, just after she was shot, was to take from her clothing a piece of paper which her corpse clutched tightly in its hand, reading "JUSTICE IS DONE."

Rope down which she can abseil; black hood to disguise face.

Retrieved from "https://britishcomics.fandom.com/wiki/Blanche_Tatum?oldid=93444"
Community content is available under CC-BY-SA unless otherwise noted.