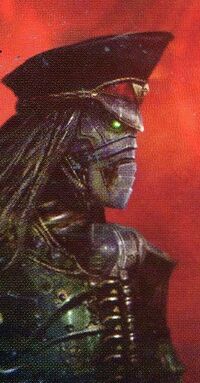 General Blackblood was the most feared of the Volgans' war robots, a sadistic killer with a penchant for drinking the oil of the robots he killed, until he was targeted by the ABC Warriors at the command of the mysterious Colonel Lash. The Warrior Joe Pineapples shot Blackblood in the head, disabling him (and earning him a lifetime of enmity), and when the ABC Warriors returned the inert robot to their superiors, they reprogrammed him.

A disgusted Blackblood awoke to find that, though his personality remained intact, he was now unable to indulge his passions for cruelty and betrayal and was to be forced to join the ABC Warriors. He accompanied the Warriors on their mission to tame Mars, then left them and went into hiding once that mission was over.

Centuries later, Blackblood resurfaced on the free robot planet of Mekka, living under the alias of businessman Bunyon Snipe and married to a trophy wife. He was forced into rejoining the Warriors by Nemesis the Warlock and remained with them while they took on the forces of Termight under Nemesis' control, but attempted to betray them for the Khaos-worshipping Deadlock during their mission to stabilize the Black Hole Bypass.

He rejoined the team again, as he had nowhere else to go, but when the Warriors eventually disbanded again, he became an arms dealer. He also blackmailed Joe Pineapples with incriminating photographs, and captured his other most hated foe in the Warriors, Hammerstein, whom he tortured for five years until Deadlock decided to bring the Warriors back together again.

For a time, Blackblood had a rather piratical "peg leg" look when he lost his lower left leg and had it replaced temporarily with a pneumatic drill.

Retrieved from "https://britishcomics.fandom.com/wiki/Blackblood?oldid=155540"
Community content is available under CC-BY-SA unless otherwise noted.