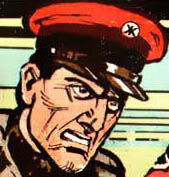 The history of the man known as the Black Major is unclear, but he is believed to be one John Shepherd, a former Royal Marine Commando who may or may not have once been a member of Action Force. Whatever his origins, and whether due to brainwashing or by choice, the Major ended up as the leader of the fighting force called the Red Shadows and right hand man of their employer, Baron Ironblood. He served the Baron faithfully until Ironblood betrayed the Red Shadows to the U.N, resulting in the decimation of the unit. The Major himself escaped and, in partnership with two other former operatives (Red Laser and Red Vulture) later led the surviving Shadows in a private war on Ironblood, who had by now reinvented himself as Cobra Commander.

Retrieved from "https://britishcomics.fandom.com/wiki/Black_Major?oldid=146951"
Community content is available under CC-BY-SA unless otherwise noted.