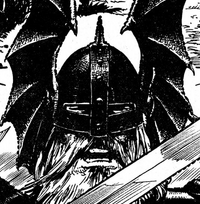 Black Lars was the chieftain of the Black Vikings. Once Max Bubba and his gang had appeared in their village, Lars believed them to be gods (very ugly gods, presumably), and put himself and his men in their service. Bubba used the Black Vikings as his muscle and had them wipe out several other villages. During the final battle Lars led the Black Vikings in an attack against Johnny Alpha and his crew only to be chased away by their twenty-second century weapons.

Retrieved from "https://britishcomics.fandom.com/wiki/Black_Lars?oldid=65076"
Community content is available under CC-BY-SA unless otherwise noted.