Note: There are several people who have been the Black Knight in Marvel Comics. 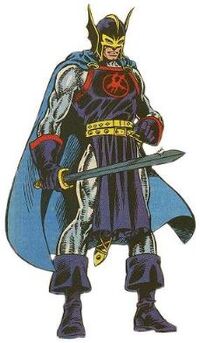 The Black Knight was originally (and has since become again) a character published by Marvel Comics US. He started off as a minor member of the Avengers who was banished to the 12th century in the early 1970's because nobody really knew what to do with him. In March 1979 he returned in the pages of Marvel UK's Hulk Comic (the brainchild of new editor Dez Skinn) in his first real solo strip, written by Steve Parkhouse and drawn by Paul Neary and John Stokes. This epic fantasy took the Knight from present-day Britain to the mystical realm of Otherworld on a quest to resurrect King Arthur and save an other-dimensional Camelot from the forces of the demon wizard Necromon and his servant Mordred, the Demon Druid.

The strip had little or no connection with the Knight's earlier appearances. Indeed, Parkhouse has since admitted that he had no interest in the established character. Although this is clearly intended to be the same Black Knight seen previously, American scientist Dane Whitman, he has evidently only just returned (temporarily, as it turned out) from his prolonged exile in the 12th century, as he now speaks like an Arthurian knight. For much of the story, he also wield's Arthur's sword, Excalibur, in place of his trademark Ebony Blade. The strip did, however, also feature another established Marvel character, Marvel UK's own Captain Britain, whom the Knight discovered living as an amnesiac hermit in a cave on the Cornish coast.

The Black Knight ran throughout Hulk Comic's run, ending in the final issue, #63 (15th May 1980), though it was briefly interrupted in issues #31 to #41 by reprints of the origin stories of both the Black Knight and Captain Britain. The two heroes also later appeared in the US-published limited series Marvel Super Hero Contest of Champions Vol 1 #1 to #3 (June-August 1982), in a story clearly set at this point in their respective careers, though no attempt was made to reconcile exactly when the stories took place in relation to each other.

By the end of the strip Camelot had been restored on Otherworld and both the Black Knight and Captain Britain had been sent back supposedly to their proper place and time by their mutual patron, Merlyn, the Knight having regained his original sword. Captain Britain next appeared in Marvel Super-Heroes Monthly #377 while the Black Knight, having returned to the past, finally made it back to the present day for good in the US-published Avengers #226. The 12th-century version also appeared in the Captain Britain story in Mighty World of Marvel Vol II #13 (June 1984) attending the funeral of Merlyn.

The Black Knight was reprinted in its entirety in The Lion and the Spider and The Siege of Camelot, the third and fourth volumes in Panini UK's Captain Britain trade paperback series in 2009 and 2010. The Knight later resurfaced in another Marvel UK title, Plasmer.

Characters from the Black Knight series

Vortigen the Walker and Lupe the Wolf 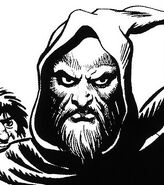 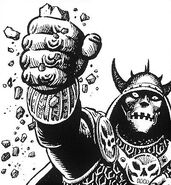 Mandrac
Add a photo to this gallery

Retrieved from "https://britishcomics.fandom.com/wiki/Black_Knight?oldid=148043"
Community content is available under CC-BY-SA unless otherwise noted.