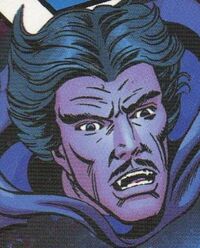 Lord Rodney Kemp appeared to be just a rather annoying minor aristocrat with designs on Courtney Ross, the quasi-girlfriend of Brian Braddock. However, Brian's suspicions were aroused when he spotted that Kemp was wearing the same ring as a werewolf whom he had been fighting the previous night in his role as Captain Britain.

Kemp invited Courtney to his ancestral home of Darkmoor Castle for the weekend. Little did she know that her host was actually not Rodney but Rupert Kemp (supposedly his own ancestor), the seventh Baron Darkmoor, a.k.a. the vampiric Black Baron! Rupert Kemp had traded his soul to Satan in exchange for immortality, and had been cursed to become a vampire... except when the full moon transformed him into a werewolf (Satan evidently not believing in doing things by halves). He had designs on Courtney because she was the spitting image of his dead girlfriend, Demelza, who had been burnt at the stake for witchcraft.

Apparently it doesn't take much time for a bat or a hero to fly between Darkmoor Castle and Thames University. Captain Britain broke out of his dungeon, flew to the university and fought the werewolf until it fell into the Thames. The wolf then changed back into a bat (a transformation which sadly wasn't drawn) and returned to the castle, as did Captain Britain. Basically, it was a very busy night for both of them.

In their final confrontation, Captain Britain grabbed a silver goblet from the mantelpiece and twisted it into a silver dagger, plunging it into the Black Baron's heart. This killed him, presumably because it was a combination of a stake (which kills vampires) and silver (which kills werewolves). The hero then burnt the parchment on which Kemp had signed his deal with Satan. This caused Darkmoor Castle to burn to the ground, but not before Captain Britain had rescued Courtney from the inferno.

Can transform into a werewolf, which is not a standard vampiric power.

Kemp can be killed by a silver dagger. Despite this, he keeps a silver goblet in his castle. Presumably Satan, who is not known for playing fair, never told him what his weakness was.

Ring with the Devil's head on it.

Sleek sports car; can turn into a bat and fly.

Darkmoor Castle contained suits of armour, medieval weapons and a portrait of Kemp's dead girlfriend Demelza. It also had gargoyles that could come to life, fly and spit fire, presumably to deter burglars.

Mordred also possesses the ability to bring stone gargoyles to life, which suggests that the Black Baron may have been a pawn of Mordred and the Nether Gods all along. Or not.

Retrieved from "https://britishcomics.fandom.com/wiki/Black_Baron?oldid=125223"
Community content is available under CC-BY-SA unless otherwise noted.