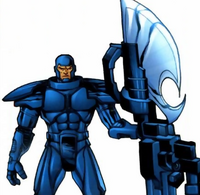 Black Axe is an apparently immortal warrior born 15, 000 years ago, who has fighting his way through history ever since, often as a soldier of fortune or hired assassin. He has had numerous identities and regularly fakes his own death in order to hide his longevity.

Teleportation (apparently a function of his axe)

Retrieved from "https://britishcomics.fandom.com/wiki/Black_Axe?oldid=153792"
Community content is available under CC-BY-SA unless otherwise noted.