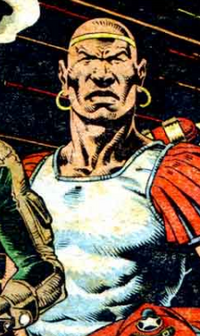 The eponymous protagonist of the comic strip Black-Hawk was a Nubian slave who, through his prowess in the gladiatorial arena and his success as a revolutionary, became a centurion in the Roman army.

Later, he was abducted by aliens and fought in another kind of arena for the benefit of extraterrestrial gamblers and thrill seekers, before breaking free along with his comrades Ursa and Zog (and old enemy Battak) and ending up on the hellish planet of Silversun, a world inside a black hole. There he lost his soul to the monstrous Soul Sucker, creator of The Great Beast, and began a lengthy quest to regain it.

Black-Hawk eventually got a lead on his soul's location from a Kwark, a crippled robot built by a race called the Thargians, but he and his colleagues fell into the black hole shortly after he finally recovered it.

Decades later, Black-Hawk and Battak (but not Ursa and Zog) exited a dimensional portal and landed in Brit-Cit, where they encountered Judge Lillian Storm before disappearing again.

Black-Hawk took his name from a hawk he adopted which he referred to as 'my lady'. (There is a tradition that if you name your hawk something like 'Killer' or 'Savage' it will be a complete wimp, but if you name it something gentle and courtly like 'Mabel' or 'Guinevere' it'll be a deadly feathered killing machine.)

Retrieved from "https://britishcomics.fandom.com/wiki/Black-Hawk?oldid=153863"
Community content is available under CC-BY-SA unless otherwise noted.