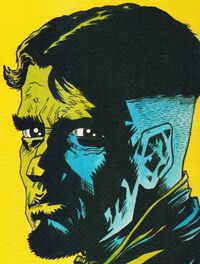 Bix Barton is the hero of the strip Bix Barton in 2000 AD. He is also, and has been for several decades at least (thanks to a nutrient solution which, when he is immersed in it, suspends his ageing processes) the sole employee of Her Majesty's Government's Department of the Irrational, for which he utilises his prodigious gifts to solve crimes and misdemeanours of the rum and uncanny kind. He is assisted in his duties by his talking walking stick, Michael Cane. Let evildoers beware!

Too many to mention.

Does a fondness for tea and cakes count?

Does Michael Cane count as a weapon? Probably does, actually. You could give someone a fair old whack about the head with him, if the occasion demanded it.

Retrieved from "https://britishcomics.fandom.com/wiki/Bix_Barton?oldid=51210"
Community content is available under CC-BY-SA unless otherwise noted.