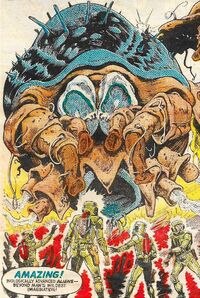 The Biogs are evil aliens from the 2000 AD strip Dan Dare. They were the first enemies encountered by the strip's eponymous protagonist after his transfer into 2000 AD. Resembling a cross between giant head lice and hot air balloons, they were a species of parasite-like aliens from the planet Zircon created by the Mother Biog. They used the deformed Shepherds, who originally dwelt on Zircon's moon, as their soldiers. What set the Biogs apart from other aliens was that all their houses, machines and tools were made from flesh: "The alien Biogs' base! — Where the buildings are alive! Grown from living tissue, with veins running between them!"

The ultimate aim of the Biogs was to set up a new home on Jupiter and use the Earth's population as fuel for their infrastructure: "They grow their houses and machines from living tissue — and they use... live fuel!" Their plan was thwarted by Dare's Martian pal Monday, who sacrificed his life to take out the Biog menace after Dare had killed the gigantic Mother Biog.

Transporting prisoners in their stomachs.

Living Axes (wielded by the Shepherds, because Biogs don't have hands).

Readers interested in aliens who make buildings that are alive should read Embassytown, a novel by China Miéville.

Retrieved from "https://britishcomics.fandom.com/wiki/Biogs?oldid=78983"
Community content is available under CC-BY-SA unless otherwise noted.