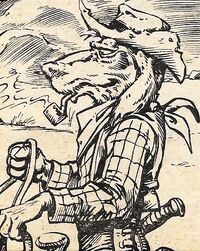 Billy the Pup is a character from the 2000 AD strip Meltdown Man. He is an intelligent talking humanoid dog, born in a future Earth where genetically engineered animals, or Yujees, are exploited by humans. Billy was employed by the villainous human overlord Leeshar to track down Nick Stone, a human who had arrived in this future Earth from the past after a nuclear accident, because Stone was trying to encourage the Yujees to rebel against Leeshar.

Stone's ally Gruff the wolfman saved Billy's life and eventually ended up persuading him to join the revolution.

Tracking. Billy always gets his Yujee.

Humanoid dog who gets regular exercise.

Billy's speech and appearance resembled those of a grizzled, weather-beaten old cowboy or sheriff from America's Wild West. He wore a checked shirt, a bandana and a wide-brimmed hat, he greeted people with "Howdy thar," and he even smoked a pipe.

Retrieved from "https://britishcomics.fandom.com/wiki/Billy_the_Pup?oldid=140825"
Community content is available under CC-BY-SA unless otherwise noted.