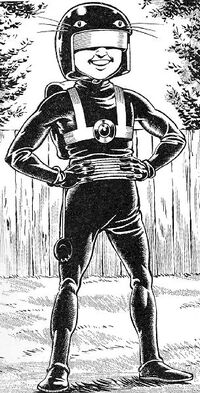 William Grange, alias Billy the Cat, was a boy who secretly fought crime and assisted the police in the town of Burnham with the assistance of his partner 'Katie', in reality his cousin Kathleen disguised by a cunning alias. Later, an older Billy continued his crime-fighting exploits without Katie in the town of Marham.

Billy's adventures originally ran in the Beano from April 1967 to September 1974. He later resurfaced, some years older, in the pages of Buddy in the 1980s, but the strip has since returned to the Beano, first in 2003 (drawn by Richard Elson) and again in 2008, as well as appearing in several Beano Annuals.

Retrieved from "https://britishcomics.fandom.com/wiki/Billy_the_Cat?oldid=32703"
Community content is available under CC-BY-SA unless otherwise noted.