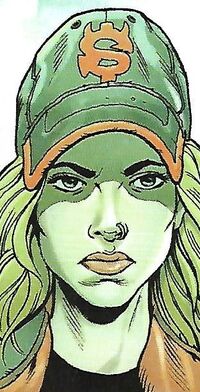 Billi Octavo is a character from the 2000 AD strip Sinister Dexter. She was first seen as the precocious kid sister of singer turned mob boss Demi Octavo, who appointed gunsharks Finnigan Sinister and Ray Dexter to effectively babysit her. This proved not to be as easy as it sounded: Billi, having seen the gunsharks blow up a helicopter full of hit men who were trying to assassinate Demi at a party, decided that she wanted to become a gunshark herself. Demi told Finny and Ray to let Billi accompany them to a few hits so that the brutal realities of the gunshark life would put her off.

After a showdown with rival gunshark Victor Ludorum in a greasy spoon, Billi found herself in possession of the late Victor's gun. She stole Ray's fact totem and accepted a contract on porn baron Minos Tarkis and his associates, due to be playing at Happyvale Golf World the next morning. Matters became even more complicated when, thanks to a case of mistaken identity, Billi instead killed a group of cardinals and senators who had taken time off from helping the underprivileged to play a few relaxing rounds of golf. Ray and Finny were blamed for the murders, but the police stopped hunting for them when Billi used her computer skills to discover some hidden information that led to the following media report: "GOLFWORLD VICTIMS REVEALED AS TWISTED SICKOS. 'WORTHY CITIZENS' WERE ACTUALLY CRIMINAL SCUM LIVING LIVES OF LUXURY UNDER FEDERAL WITNESS SCHEME." Despite the fact that everything had turned out all right in the end (sort of), Demi decided that Billi had experienced quite enough of the gunshark life, and sent her back to school in Switzerland.

Since Demi's death, Billi has grown up a lot, and has proved to be a valuable ally to Sinister and Dexter, not least because she's an excellent computer hacker. She ended up working as a data broker for crime boss Senor Apellido, who didn't know that she was a police plant trying to find information Tracy Weld could use to bring Apellido down. Then Ray told Tracy that Apellido was in fact a clone of Holy Moses, Billi's late sister's husband, and the police told Billi. An enraged Billi, who blamed Holy Moses for her sister's death, was on the verge of shooting Apellido, but was stopped by Finny, who then knocked Apellido out cold when he ordered him to kill Billi. During their escape from Apellido's apartment Billi was shot and lost a lot of blood. Finny managed to get her to the Surgeon, a medic employed by Downlode's criminals, who saved her life.

Ray and Finny went on to kill the Mover, a version of Holy Moses from a parallel dimension whose presence was destabilising reality. Doing this erased the pair from existence — they were still alive, but nobody could remember who they were and no records existed of them anywhere. This was troubling for Billi when she met them laying flowers at her sister's grave and they acted as if they knew her. Although she had spent five years becoming the best data broker in Downlode, she couldn't find any trace of the two mysterious men on the Lode wide web.

When she was a teenager Billi wore braces on her teeth and spoke in an incredibly annoying 'Valley Girl' slang, which she has since mercifully toned down.

Retrieved from "https://britishcomics.fandom.com/wiki/Billi_Octavo?oldid=95862"
Community content is available under CC-BY-SA unless otherwise noted.