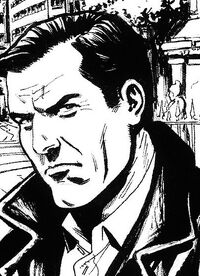 Bill Savage was a lorry driver from East London, who lived in an alternate universe in which Britain was flooded in 1990 when a nuclear accident caused melting of the polar ice cap (see Disaster 1990!). Savage (aided by Professor Steve Bamber) helped in a small way to restore order, but in 1999 the country was invaded by the Volgans, his world's version of the USSR. On March 31st 1999, Savage's wife and children were killed by a Volgan driving a tank (see Invasion!).

Savage launched a one-man war on the Volgans which led to him being recruited into the resistance by Lt. Peter Silk. Savage became a leader of the resistance and continued the fight after Silk was murdered, eventually having plastic surgery to hide his identity by adopting that of his late brother, Jack, who had supposedly died when the Volgans nuked Birmingham (though in fact, Jack was eventually revealed to have been a Volgan collaborator). During the Volgan occupation Savage kept up the morale of the British public by actions such as singing 'You'll Never Walk Alone' live on national television, writing graffiti on Hadrian's wall, and blowing up Nelson's column so that it landed on a group of Volgan tanks.

Bill's other brother, Tom, initially a collaborator, was also murdered after seeking revenge on Volgans who raped his daughter, and Bill's brother-in-law Noddie suffered brain damage at the Volgans' hands. Consequently, Bill has over time become battle-hardened to the point of sociopathy.

When Britain was liberated from the Volgans Jack revealed to Bill that he was still alive, and claimed that Bill had only survived for so long because he, Jack, had been pulling strings for him while he worked for the Volgans. He then committed suicide by jumping in front of one of Howard Quartz's drones, dying in Bill's arms as he asked him to look after his Volgan family.

After his friend Rusty O'Dell was elected Britain's first post-Volgan Prime Minister, Bill left to aid the anti-Volgan resistance in the rest of Europe.

Lorry driving; always knowing exactly where he is in London even if blindfolded; being a very strong swimmer.

Has been known to use a road-laying machine, various boats, an amphibious Army vehicle nicknamed "the Duck", a coal lorry and a Ford van.

Retrieved from "https://britishcomics.fandom.com/wiki/Bill_Savage?oldid=96882"
Community content is available under CC-BY-SA unless otherwise noted.