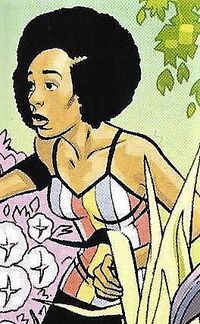 Bill Potts was working in the canteen at a university when The Doctor, then working as a lecturer there for reasons of his own, noticed her attending his lectures despite not actually being a student. He volunteered to be her tutor, but learning from the Doctor proved to involve more than just sitting around in a classroom...

Bill was eventually forcibly converted into a Cyberman, died, and was resurrected as something other than human. Or something. It was all a bit confusing.

Finding the questions that actually need asking at a glance; playing skittles.

Young human female who gets regular strenuous exercise (running away from aliens).

Bill is played in the TV version of Doctor Who by Pearl Mackie.

Much was made in the media in 2017 of the fact that Bill was supposedly the Doctor's first lesbian companion. In fact, that particular accolade should go to Izzy Sinclair from the Doctor Who Magazine strip (although Bill mentioned it far more often).

Retrieved from "https://britishcomics.fandom.com/wiki/Bill_Potts?oldid=116983"
Community content is available under CC-BY-SA unless otherwise noted.