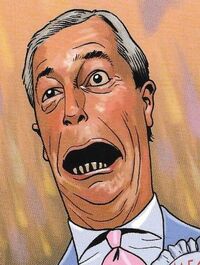 Bilious Barrage is a character from the Judge Dredd Megazine strip Judge Dredd. He was the Meg First Party candidate in the Eddie Booth Block council elections, and stood on an anti-alien immigration platform bolstered by apparent acts of terrorism seemingly perpetrated by sympathisers of the alien Zhind. Barrage was arrested for incitement to riot and a routine scan revealed that he had unwittingly been in contact with the 'terrorist', in fact a human girl named Ridley Weaver who had a lifelong hatred of aliens caused by having seen her mother eaten by one at an early age. Weaver had been trying to stir up anti-alien feeling, and while deploring her crimes, Barrage nonetheless lost no time in trying to use her tragic past to push his own agenda when released... an agenda which was slightly undermined by the revelation that his own wife was an alien, whom he had left hidden away in Brit-Cit.

Appealing to the worst in people.

Bilious, one of the central characters in the short story 'People Like Us', is of course based on Nigel Farage.

Eddie Booth Block is named for the white bigot played by Jack Smethurst in the 1970s TV sitcom Love Thy Neighbour.

Retrieved from "https://britishcomics.fandom.com/wiki/Bilious_Barrage?oldid=79547"
Community content is available under CC-BY-SA unless otherwise noted.