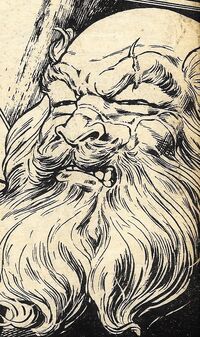 Big Red One is a character from Harry Twenty on the High Rock. He was perhaps the most feared inmate of the orbiting prison known as the High Rock, as he was serving one hundred years for a string of murders. His real name is unknown: his prison moniker was derived from his size, the colour of his hair and the length of his sentence.

Harry Twenty first encountered Big Red One when they got into a fight over the use of a porthole. Big Red One later avenged himself on Harry by getting his cronies, Root Sixty-Six and Seventy-Seven Sunset, to shove him off the High Rock while he was outside on punishment detail. Fortunately, Harry was hauled back in by the guards.

Big Red One retaliated by assaulting Harry in the prison library (probably the first time he'd ever been in there), but Harry won the ensuing fight although outnumbered. Big Red One and his goons were sentenced to six orbits in solitary. Guard Pusser suspected that Harry had been involved and gleefully told him that the thugs were sure to come after him later.

Harry's next significant encounter with Big Red One, Root Sixty-Six and Seventy-Seven Sunset came when they tried to batter him to death with ice picks so they could board his home-made escape capsule. This attempt was unsuccessful and Harry made it back to Earth, only to watch one of his fellow escapees die and the other reveal their true nature as an android spy. Meanwhile, up on the Rock, Root Sixty-Six and Seventy-Seven Sunset were executed, and Big Red One was placed in the condemned cell.

After the death of Genghis Eighteen and the unmasking of Ben Ninety, Harry was in desperate need of new allies, and he found one when he was returned to the Rock and placed in the condemned cell as well. He teamed up with Big Red One to overthrow Warden Worldwise, Chief Thrower and the rest of the prison's brutal staff.

Big Red One still held a grudge against Harry, and ended up cornering him in the Rock's 'compu centre' with the intention of killing him. However, Warden Worldwise was there as well, hiding behind a fake screen. The Warden shot at Harry, Harry ducked, and Big Red One was killed instead. The first prisoner to see his corpse provided him with the following brief epitaph: "Big Red — he's dead!"

Retrieved from "https://britishcomics.fandom.com/wiki/Big_Red_One?oldid=64223"
Community content is available under CC-BY-SA unless otherwise noted.