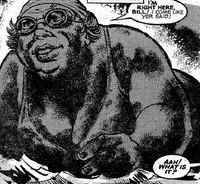 Big Nessie McNairn is a character from the 2000 AD strip Invasion!. She was a female wrestler and athlete who helped resistance fighters Bill Savage and Peter Silk take down the Volgan general Rosa Volgaska. Afterwards she humiliated Volgaska on live television after McNairn beat the general down.

McNairn then went undercover at a travelling circus, posing as a faux-bearded lady. After helping Savage and Silk protect Prince John from being captured by the Volgan troops, she decided to go with them.

Very strong and a good swimmer.

Retrieved from "https://britishcomics.fandom.com/wiki/Big_Nessie_McNairn?oldid=96398"
Community content is available under CC-BY-SA unless otherwise noted.