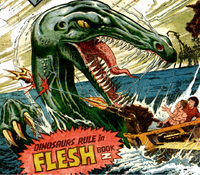 Big Hungry was a ferocious male Nothosaurus who featured as the main antagonist in Book II of Flesh!.

After all his young were slaughtered by the sadistic Claw Carver, Big Hungry found a human's scent on their bodies and went on a blood-soaked quest of revenge. He got close to killing Carver at one point, only to be badly wounded and forced to flee. After slowly recovering from his wounds, Hungry was attacked by another aquatic dinosaur, but after a long fight, Hungry won out and resumed his quest for revenge. He forcefully took leadership of a large Nothosaurus pack and led an all-out attack on the ocean-based Trans Time Base.

During the chaos, Hungry made his way inside and finally claimed his vengeance by cutting Carver in two with his teeth. Shortly after the Trans Time base was propelled into the future, ending up in modern times at the bottom of Loch Ness in Scotland. Emerging from the wreckage, Hungry made his home in the lake and became the stuff of legend as the Loch Ness Monster.

Powerful swimmer with strong jaws; seemingly a tad smarter than most dinosaurs.

According to Wikipedia, 'Nothosaurus' comes from Greek words meaning 'false lizard'. A Plesiosaur has four large flippers, but a Nothosaurus has four limbs with clawed feet on the end. This makes a Nothosaurus less well adapted to an aquatic life, but a more exciting adversary for a comic book, as children probably don't want to read about a man being flippered to death.

Retrieved from "https://britishcomics.fandom.com/wiki/Big_Hungry?oldid=57821"
Community content is available under CC-BY-SA unless otherwise noted.