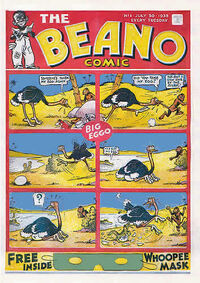 Prior to the launch of the Beano, Reg Carter and the D.C. Thomson staff were considering what character to use on the front cover. They came up with two possibilities. Eggo was one of them, but he wasn't called that to start with — the original scripts refer to him as Oswald the Ostrich. Doesn't quite have the same ring to it...

Eggo, using his real name, debuted on the front cover of issue 1 of the Beano, dated 30th July 1938. Drawn by Reg Carter, his quest was to find his missing egg, and his misadventures in that endeavour were the defining element of the early strips.

This storyline would be forgotten, however, when World War II broke out only a year later. Now Eggo and the rest of the cast of the Beano would give out messages of war support. For example, Eggo is pranked by a house owner and gets revenge by putting up lights outside, getting the man into trouble during the blackout! This was a lesson to readers to keep lights off during blackouts, as the lights attract the enemy and their bombs.

The Beano Book ended up merging with The Magic Fun-Book to create The Magic-Beano Book, starting with the 1943 edition, as a consequence of wartime paper rationing. Eggo teamed up with Magic's cover star Koko the Pup in a joint strip in the annual, called Eggo and Koko. In one such strip, the two go horse riding, but lose the horses. In the end, Koko rides Eggo instead.

In 1947, it was decided that children couldn't relate to Eggo (despite all that the heroic ostrich had done for the ungrateful little brats during Britain's darkest hour) as he didn't have a humanoid body, having wings instead of arms. As a result, the Beano got its first front cover redesign in issue 327, the first issue of 1948, with Biffo the Bear replacing Eggo as the cover star. Eggo's strip moved to a black and white half page inside, and Eggo replaced Peanut in the masthead. Unfortunately, Carter's health was failing, and early in 1949 he died. As a result, Eggo was dropped from the comic after issue 358, dated 2nd April 1949. However, he remained on the masthead until Dennis the Menace took over in 1954.

Big Eggo had the strength level appropriate to an ostrich of his age and size who engaged in regular moderate exercise.

Retrieved from "https://britishcomics.fandom.com/wiki/Big_Eggo?oldid=47307"
Community content is available under CC-BY-SA unless otherwise noted.