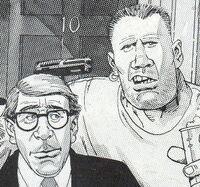 Big Dave is the hardest man in Manchester, if not the world — and if you reckon different, you slag, you wanna keep that to yerself if you know what's good for you! Dave and his mate Terry Waite stopped Saddam Hussein and his evil alien allies from Sirius from turning the whole world into poofs with their deadly Love Gun after Prime Minister John Major asked for Dave 'specially 'cos no-one else was hard enough. Later, Dave got friendly with two right Royal sorts, and later still Dave led a bus full of disabled children to World Cup victory against a German team led by Adolf Hitler. Good ol' Dave — no-one gets the better of England's finest when he's around!

Not the sharpest tool in the box.

When Dave was hired by John Major, the payment he demanded for defeating Saddam was a lifetime supply of designer shell suits, a three week holiday in Tenerife (with an indoor bog) and a bright orange 'H' reg Ford Capri with a smart flame effect down the sides. You're worth every penny, my son!

Retrieved from "https://britishcomics.fandom.com/wiki/Big_Dave?oldid=93827"
Community content is available under CC-BY-SA unless otherwise noted.