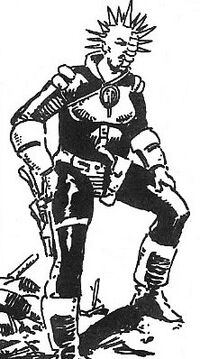 Big Cynthia, a character from the 2000 AD strip Strontium Dog, was a large, muscular mutant woman whose face was partially obscured by what appeared to be some form of carapace. She was one of the Strontium Dogs, alongside Armstrong Jones (her partner) and Slabhead, who attempted to capture Adolf Hitler from 1945 Berlin. She was last seen becoming caught in a time-trap far into the future, repeating the same two seconds for eternity.

'Cynthia', meaning 'from Mt Cynthus', is an epithet of the Greek goddess Artemis, who was said to have been born there. She was the goddess of the hunt and is frequently depicted with a bow and arrows.

Retrieved from "https://britishcomics.fandom.com/wiki/Big_Cynthia?oldid=139518"
Community content is available under CC-BY-SA unless otherwise noted.