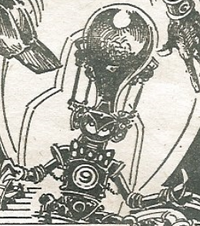 Big Brain was a Class 9 robot that came to Verdus shortly after SJ1 to serve as leader. Unfortunately, Big Brain had been wired to see humans as such holy deities, that when the first human settlers to Verdus arrived, he accused them as being simulants and had them jailed, a process he repeated with every new Bach of humans to the planet. When Sam Slade arrived he was taken to Big Brain where he proved to the robot that he was indeed human, and so were all the prisoners. The knowledge of his actions drove Big Brain insane, and Slade was instated as the new king of Verdus.

Very dumb for being hyper intelligent.

Retrieved from "https://britishcomics.fandom.com/wiki/Big_Brain?oldid=77835"
Community content is available under CC-BY-SA unless otherwise noted.