Big Ben, The Man With No Time for Crime 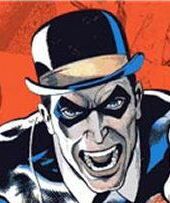 Varying accounts exist as to the background of the man called Big Ben.

According to his solo series, he is an alien shapeshifter who operates on Earth as Lord Benjamin Charterhouse Fortescue and who, as Big Ben, has a secret headquarters behind the faces of the Westminster clock tower reached by a secret elevator behind a grandfather clock in the House of Lords, as well as two aides, Tania (who provides him with intelligence) and Fosdyke (his manservant).

In another account, he is the result of a British government experiement intended to follow up on the work of Dr. Emil Gargunza's Project Zarathustra by creating a superhuman loyal to Britain. According to this second account, Ben is a delusional character who sees himself as a handsome and heroic person but is actually a mentally deficient, almost Neanderthal figure as a result of the process that created him being imperfect.

Whatever the truth of his origins, Ben has the heart of a hero and sees himself as a protector of the realm, upholding the traditional British values of honour, decency, good manners and just generally being an all round top bloke. He never goes anywhere without a carnation in his buttonhole (which according to at least one source is actually growing out of his chest).

Big Ben may or may not have had a lengthy career fighting enemies of the realm such as the notorious Dai the Death (according to one account, this was all an implanted delusion) but he has certainly clashed with the rogue superhero Marvelman at least once.

In the American-published continuation of Alan Moore's Marvelman saga in the Miracleman series, the psychotic Big Ben was eventually "deprogrammed" and took on the new identity of the British Bulldog after realising his past was a lie. However, in another Warrior strip, The Liberators, we were introduced to a race of alien shape-shifters to which Big Ben apparently belonged according to his own strip. These conflicting accounts have yet to be reconciled.