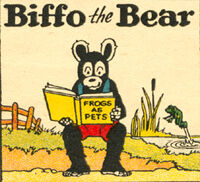 In 1947, market research by the Beano staff showed that children didn't relate to the comic's cover star, Big Eggo, because the ostrich wasn't humanoid. So the first issue of 1948 (#326, dated January 10, 1948) had a new masthead with Biffo in place of the Peanut character introducing himself. That cover would be the last one with Eggo as the cover story. Two weeks later (issue 327, dated January 24, 1948), Eggo was in that spot on the masthead, and Biffo took over the front cover.

Drawn by Dudley D. Watkins, who was already drawing Lord Snooty for the Beano, Biffo was originally a fun-loving bear who seemed to be a school-age child. With a human lifestyle and having two arms and two legs like a human (unlike Eggo, who had hands at the end of his wings!) children could more easily relate to him. It wasn't long before he was aged up, depicted as living alone, with his best friend Buster (a human boy) living next door, and with two nephews occasionally appearing, Cuddly and Dudley, who later got their own story in the revived 1970s version of Magic comic. Biffo would be shown doing various jobs, before it was eventually settled on him being a zookeeper. Towards the end of Watkins' tenure on the strip, in spring 1969, a particularly effective series of Biffo covers was published, featuring elaborate depictions of Biffo's ancestors, attired in highly-detailed medieval/historical costume. These covers rank amongst the most memorable within the strip's history.

Around the same period, Watkins began a fruitful and innovative collaboration on Biffo with Bob McGrath, the artist of The Three Bears. Watkins drew Biffo and Buster and background elements, with space left for McGrath to insert his own renditions of the other bear characters, and the interaction between the characters is superbly realized. The strip is quite possibly the finest example of this type of art in the history of the Beano.

In 1969 Dudley Watkins suddenly died at his drawing board with a Biffo strip pencilled but not inked. David Sutherland, artist of The Bash Street Kids, took over from this point, inking that one and drawing all future instalments until Jimmy Glen took over. Dave Sutherland later famously recounted how he was summoned into a make-or-break meeting, where he was told — not asked — to procure all Biffo covers for the immediate future! The Sutherland version of Biffo was impeccably rendered, but it has to be said that for many purists, the spirit of Watkins was sorely missed, especially in an era when reprints were frowned upon and discouraged (until the late eighties when it became acceptable and popular to rerun vintage UK strips). Biffo would remain on the front cover of The Beano until issue 1677, dated September 7, 1974. Dennis the Menace and Gnasher took over the following week.

Losing the cover page was the beginning of the end for Biffo. With his page reduced to four colours inside the comic, the strip gradually declined in popularity and was eventually dropped in 1986, by which time the strip had been reduced to half a page, and Jimmy Glen had replaced David Sutherland. The character was replaced, along with Little Plum, by Calamity James. However, Biffo returned in issue 2445 (dated May 27, 1989), in a mute strip which no longer featured Buster. Most of these strips were drawn by Sid Burgon, but Trevor Metcalfe also drew a few episodes. When one reader asked Dennis the Menace why Biffo no longer spoke, Dennis said that he had asked Biffo why and the answer was "!" This half-page strip ran until issue 2954 (dated February 27, 1999). David Sutherland drew a special Biffo story for the Beano's seventieth anniversary in 2008, and he made another appearance in the Beano Annual 2010.

Biffo had no superpowers (apart from being a bear possessing human-level intelligence).

Biffo had the strength level appropriate to a bear of his age, weight and species who engaged in regular moderate exercise.

(Latterly) lost the ability to talk, possibly as the result of some sort of Flowers for Algernon-type scenario.

Since he was a zookeeper, he probably owned a shovel.

None. Biffo was not an aggressive bear, and he did not live in a violent neighbourhood.