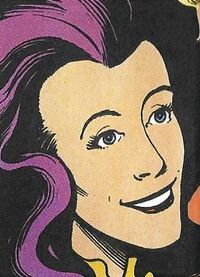 Betsy Braddock is the psychic-powered mutant twin sister of Brian Braddock, alias Captain Britain, and the younger sister of Jamie Braddock. After trying various careers, including charter pilot and fashion model, she became an agent of S.T.R.I.K.E.'s Psi-Division. However, when the crime boss known only as the Vixen staged a takeover of S.T.R.I.K.E., all the members of the Psi-Division were killed by the assassin Slaymaster. The only survivors were Betsy, her friend Alison Double, and her lover Tom Lennox.

Later, Betsy aided her brother and his allies, who included Saturnyne and the Special Executive, in the fight against Mad Jim Jaspers, a mutant with the power to warp reality who turned the nation into a madhouse when he was elected prime minister. Jaspers began by rounding up all paranormal individuals and putting them into concentration camps in order to keep them out of his way for whatever cracked-up scheme he had going on for the world. Betsy and Alison went on the run with Tom Lennox but he was murdered by the Beetles — Jaspers' secret police — while he was in mind-link with Betsy. She felt the pain of his death in her mind, which traumatised her for some time afterwards, as did being imprisoned in one of Jaspers' camps with Alison. The pair were freed after Jaspers' eventual death at the hands of the Fury.

After Betsy and Alison had spent several weeks recuperating at Victoria Bentley's home, they returned to Braddock Manor, Betsy's ancestral seat, where they planned to live normal lives again. However, that plan was easier made than executed. The formerly insane sentient computer Mastermind became their butler, Jeeves, and a mutant named Meggan (a naïve, semi-feral girl with a monstrous appearance that belied her kind heart) moved into the mansion with them. Much more distressingly, Kaptain Briton, an evil other-dimensional doppelganger of her brother, tried to rape Betsy. She used her mental powers to destroy his brain, killing him, but was almost as deeply shocked by what she had done as she was by his attempted assault.

Braddock Manor was then visited by agents of the R.C.X. (Resources Control Executive) who brought with them a group of refugee children known as the Warpies — youngsters who were accidentally mutated by the after-effects of the reality warp created by Mad Jim Jaspers and gifted with paranormal abilities that were strange and frightening to them. At first Brian wanted nothing to do with the Warpies, but Betsy's parental instincts kicked in and she insisted that they stay. Living in a house full of mutant children got a bit too much for Brian and he moved out with Meggan so they could have adventures away from Braddock Manor. (By this time Meggan had metamorphosed into her true form: a beautiful, glowing, angelic sprite.)

Under the R.C.X.'s prompting, Betsy briefly stood in for her brother as Captain Britain, empowered by the costume formerly worn by Kaptain Briton, and assisted by Captain UK. When she engaged Slaymaster in battle he proved to be her superior as a warrior and blinded her by gouging out her eyes. Crying out psychically in pain, Betsy was heard by Brian, who rushed to her side and battled Slaymaster. Enraged at what the assassin had done to Betsy, Brian killed him by crushing his skull with a large rock. Betsy subsequently told her brother that being blinded wasn't so bad for her because she could use her psychic powers to compensate. That Christmas she went on a skiing holiday to Alison's Swiss chalet.

Later on Betsy's sight was restored and she eventually joined the X-Men as Psylocke, her appearance changing dramatically when she was body swapped with a Japanese assassin named Kwannon, though she has since regained her original appearance. Betsy also served briefly with a short-lived incarnation of the super team Excalibur, and has since become the leader of a new incarnation of the team, having adopted the Captain Britain name once more. She was once romantically involved with the X-Men's Angel.

Various mental powers, including telepathy and low-level precognition. Several years later she developed telekinesis. Also, she can kill someone by frying their brain.

She can fly aeroplanes.

Elmo, a member of Technet, was able to temporarily disable Betsy's psychic powers.

As Captain Britain, Betsy wore a power suit formerly belonging to the evil Kaptain Briton, which duplicated her brother's powers enabling her to fly and giving her superhuman strength.

Since the mid 1980s, Betsy has been fully incorporated into the mainstream American Marvel Universe, and as a member of the X-Men has ironically had a rather higher profile than her brother.

Retrieved from "https://britishcomics.fandom.com/wiki/Betsy_Braddock?oldid=158025"
Community content is available under CC-BY-SA unless otherwise noted.