Start a Wiki
Beryl the Peril 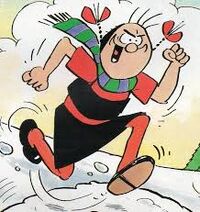 Effectively another Minnie the Minx, Beryl (who habitually wears red and black, like fellow D.C. Thomson nuisances Dennis the Menace, Minnie, The Smasher and Roger the Dodger) is basically just a little girl who is continually getting into trouble. Not intrinsically bad, she is nonetheless extremely naughty.

Spreading chaos and anarchy wherever she goes.

Retrieved from "https://britishcomics.fandom.com/wiki/Beryl_the_Peril?oldid=38792"
Community content is available under CC-BY-SA unless otherwise noted.