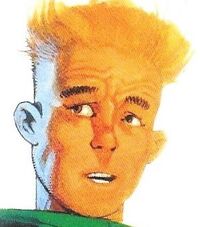 Bennett Beeny was the subject of the popular story America, set in the world of Judge Dredd, which appeared in the Judge Dredd Megazine issues 1.01 to 1.07 in 1990. He also narrated its sequel, The Fading of the Light, in issues 3.20 to 3.25. Beeny was born in Fred Nietzsche block and very early in his life — possibly before his birth — his father, Eggar J. Beeny, was murdered by a serial killer. One of his earliest memories was witnessing the birth of America Jara, who became his best friend and fought off the block bullies who tried to pick on him. While the hot-headed America thought that the whole system of Mega-City One was repressive and in urgent need of reform, her placid — or cowardly — friend thought that it was possible to live a good life in the Big Meg if one just kept one's head down and tried not to make any trouble.

Beeny's mother died of "terminal boredom" when he was a young man. He lost touch with America when, disappointed because she wouldn't be his girlfriend, he went off to Mega-City Two, returning after the Apocalypse War. Beeny had always had a gift for comic songs, and he became incredibly rich through singing inane but catchy ditties that were a big hit with the public. His fortune gained him a mansion set in spacious grounds and a robo-valet called Robert, but his love life was a mess and he ended up cruising the city's slums looking for prostitutes. On one such expedition he was reunited with America, who was with a pro-democracy terrorist group called Total War. They killed two Judges and shot Beeny's throat out.

While recovering in hospital, Beeny fed Judge Dredd false information about the Judge-killers. He found this easier than it would otherwise have been because he was entirely mute and had to type his answers out slowly and laboriously on a screen, which both negated his urge to babble and made Dredd too impatient to grill him thoroughly.

Beeny was given a synthetic robot voice (the strip was written in 1990, before artificial voice technology had improved beyond the voice one is accustomed to hearing from Stephen Hawking) and discharged. America later turned up at his mansion, told him about the tragic events in her life that had led to her joining Total War, slept with him, and asked him for one hundred thousand credits to fund an attempt to blow up the Statue of Liberty (which would show the world how evil the Judges were, or something). Beeny gave her the money but promptly told the Judges about the group's plan. They promised him that America wouldn't be hurt, but she was shot in the head, rendering her brain-dead. The distraught Beeny had sex with America's brain-dead body, begetting a daughter on her, and then had his brain put in her skull — partly to punish himself by making his very corporeal existence a constant reminder of his treachery; partly because he couldn't bear to lose America again; and partly because to continue his career he needed a better voice.

Years later America's body started to reject Beeny's brain, causing him nausea, seizures, incontinence, deterioration of motor skills and black-outs. The survivors of Total War contacted him and asked him to participate in a suicide mission to honour America's memory. Beeny at first acquiesced, angry at the Judges after one of them had stood by and watched while he was brutally gang-raped, but then changed his mind after Judge Dredd gave him his dead father's teeth. He told the Judges (which should have come as no surprise to Total War) and had his young daughter, America Beeny, inducted into the Academy of Law — the one place where the intelligent and cheerful girl would be safe from the terrorists wishing to exploit her. He then went to his death at the Fading of the Light Euthanasium with his only remaining friend, the robo-retainer Robert.

The story of Bennett Beeny's life and death is part of volume one of Judge Dredd: The Mega Collection, published by Hachette Partworks Ltd.

Retrieved from "https://britishcomics.fandom.com/wiki/Bennett_Beeny?oldid=90572"
Community content is available under CC-BY-SA unless otherwise noted.