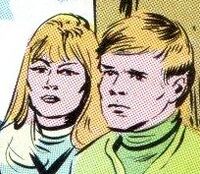 Good-hearted cockney Ben Jackson was an able seaman in the Royal Navy when he met the upper-crust Polly at London's Inferno nightclub in 1966, and the pair inadvertently became caught up in the affairs of the time traveller known as The Doctor. Joining the crew of the TARDIS quite by accident, they travelled with him (and later also with new companion Jamie McCrimmon) for some time before equally accidentally being returned home on the same day that they'd originally left. According to Sarah Jane Smith in The Sarah Jane Adventures, they later married and ran an orphanage in India.

Polly's last name, Wright, was never given on screen. It has been used extensively in other media though, and was apparently in the rehearsal script for her introductory TV story. Fandom once believed her name was Lopez, but this seems to have been due to mishearing a line of dialogue in the TV story The Faceless Ones.

Retrieved from "https://britishcomics.fandom.com/wiki/Ben_and_Polly_(Doctor_Who)?oldid=149266"
Community content is available under CC-BY-SA unless otherwise noted.