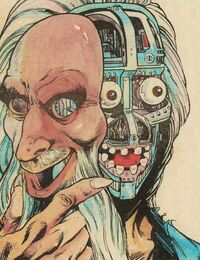 The picture says it all. If you're the warden of a maximum security prison and you want to discourage any attempts at escape, what do you do? Sure, the prison is virtually impossible to get out of because it's the High Rock, a satellite which orbits the Earth twice a day and is run by a bunch of vicious thugs, but what if you want to be absolutely sure that any escape attempts fail? Well, you spend untold millions of government money investing in a robot that looks exactly like a senile old man, you plant it in the cell of two prisoners who look a bit uppity, and you sit back and wait for the fireworks.

Just to be totally certain that the two rogues are caught red-handed (the wiki-droid was going to write in flagrante delicto, but that gives a somewhat misleading impression) you programme the droid to help the prisoners escape to Earth in a home-made space capsule. Without the robot's knowledge and practical skills they'll never make it all the way home only to have their dreams of freedom destroyed at the last moment by the arrival of the tipped-off prison guards (led by Chief Thrower), you see, and that's the only thing that will crush their spirits so totally that they never try to escape again. Which they can't, anyway, because now they haven't got the android to assist them. Um...

Oh, and be sure to choose a couple of prisoners — say, Harry Twenty and Genghis Eighteen — who are so consumed with their desire to break free that they never notice that their cellmate smells of oil and makes a faint whirring noise whenever he moves. If you're going to spend so much time, money and manpower to psychologically torture them in the most elaborate way possible, you don't want them to twig what's going on and spoil all your fun.

Astonishingly life-like (he even eats); can identify Pusser and other guards by their bootsteps.

His teeth (he once bit a guard on the shoulder).

Once the android had revealed its true nature, the guards sent to retrieve Harry set fire to it, because they didn't need it any more and they wanted to destroy evidence of their presence in Oceania.

Retrieved from "https://britishcomics.fandom.com/wiki/Ben_Ninety?oldid=63744"
Community content is available under CC-BY-SA unless otherwise noted.